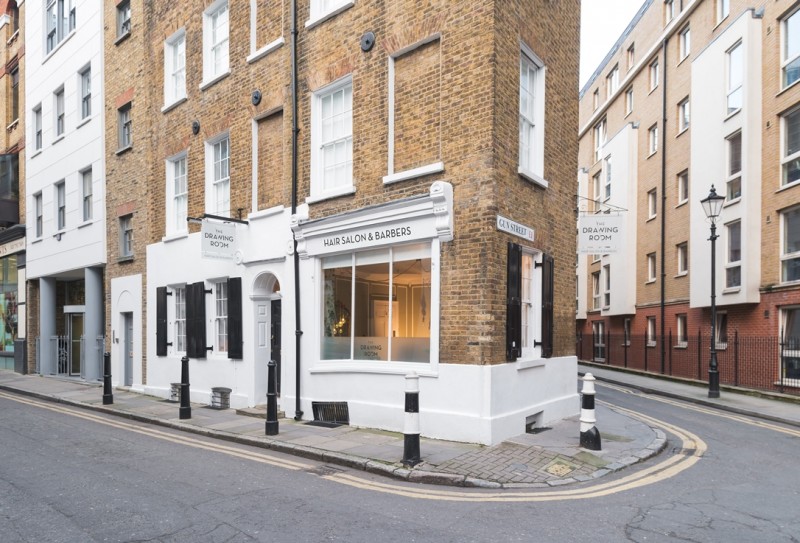 The Drawing Room is situated in a building that has witnessed more than 250 years of London life. Built around 1750, the house was converted into a shop during the mid-19th century and retains much of its original charm. We have a strong interest in the history of our Spitalfields location and this page tells the story of how the area has developed and changed, beginning in medieval times through to the present day. 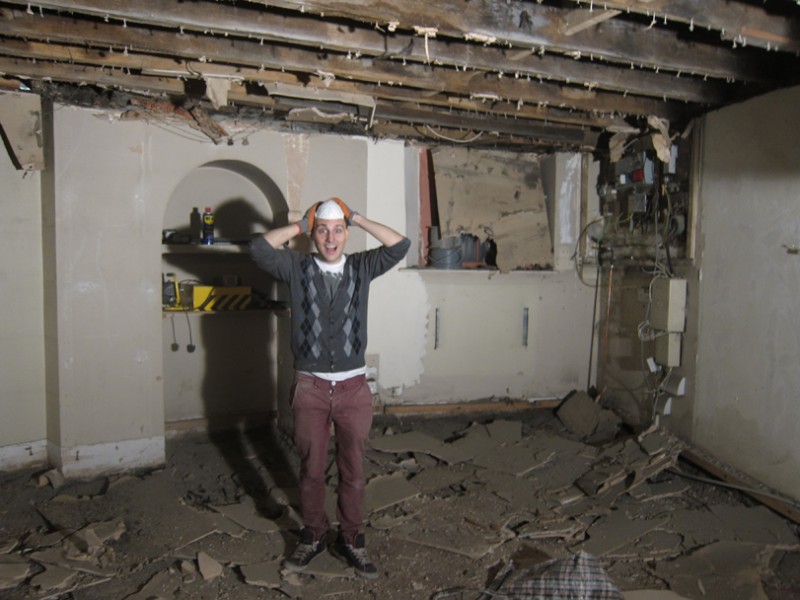 Grade II listed for its architectural and historic interest, 41 Artillery Lane is noted as having “a remarkably complete survival of the interior of this type of house”. Having outgrown the building, Strettons estate agents moved to a new site and restored the upper floors of the building to residential use. The ground floor and basement were made available for commercial premises and we took over the lease in 2014. In November we began a 4-month project to convert the space into a hair salon, carefully restoring and protecting the building’s original features. 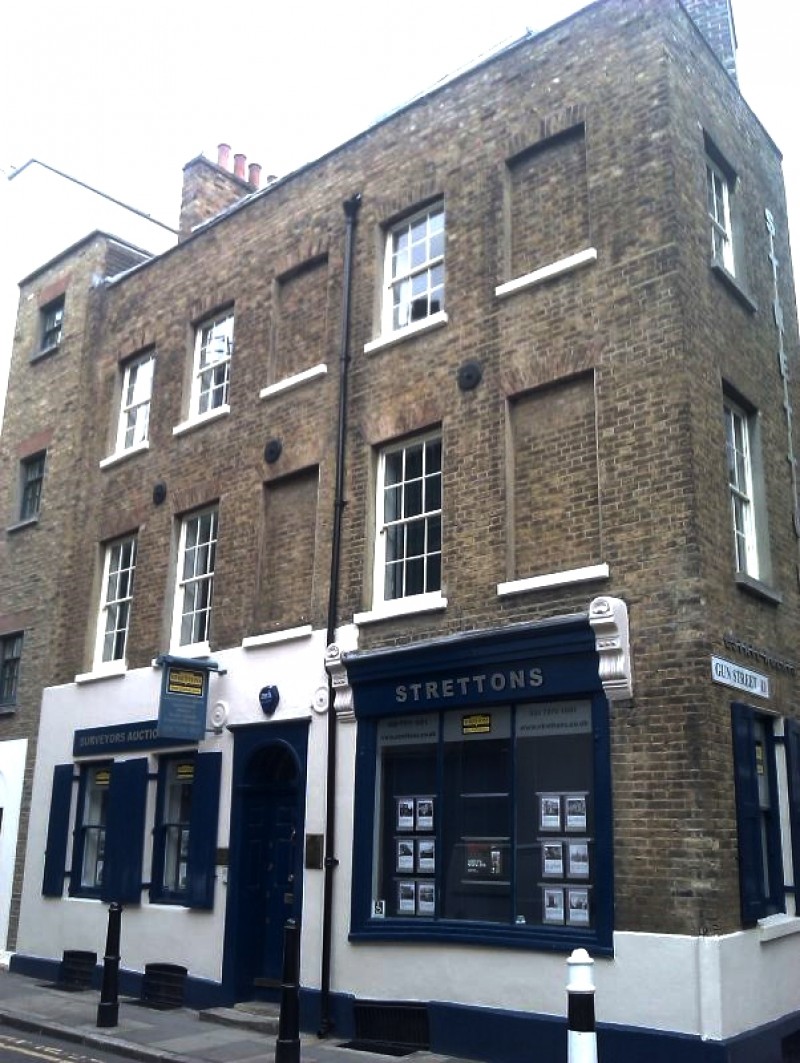 A local firm of estate agents, Strettons, had purchased 41 Artillery Lane in the late 1980s and for 20 years the building was its head office. As the 1990s progressed and the century turned, Spitalfields underwent a dramatic transition from deprivation to gentrification. The need for more space and traffic congestion led to the fruit, vegetable and flower trading of Spitalfields Market to be relocated to a new site in Leyton in 1991. A decade later, Foster and Partners began work to redevelop Old Spitalfields Market into its current form.

Although architectural historians Mark Girouard and Colin Amery, and the art historian and television presenter Dan Cruickshank, had succeeded in conserving historic Spitalfields, the area remained stubbornly poor and run down. This stood in stark contrast to the proximate wealth of the City of London, but Spitalfields and Shoreditch popular with artists, fashion designers, musicians, and other creative industries. Many properties were redeveloped, as was 41 Artillery Lane, as shown in this series of images from the late 1980s. 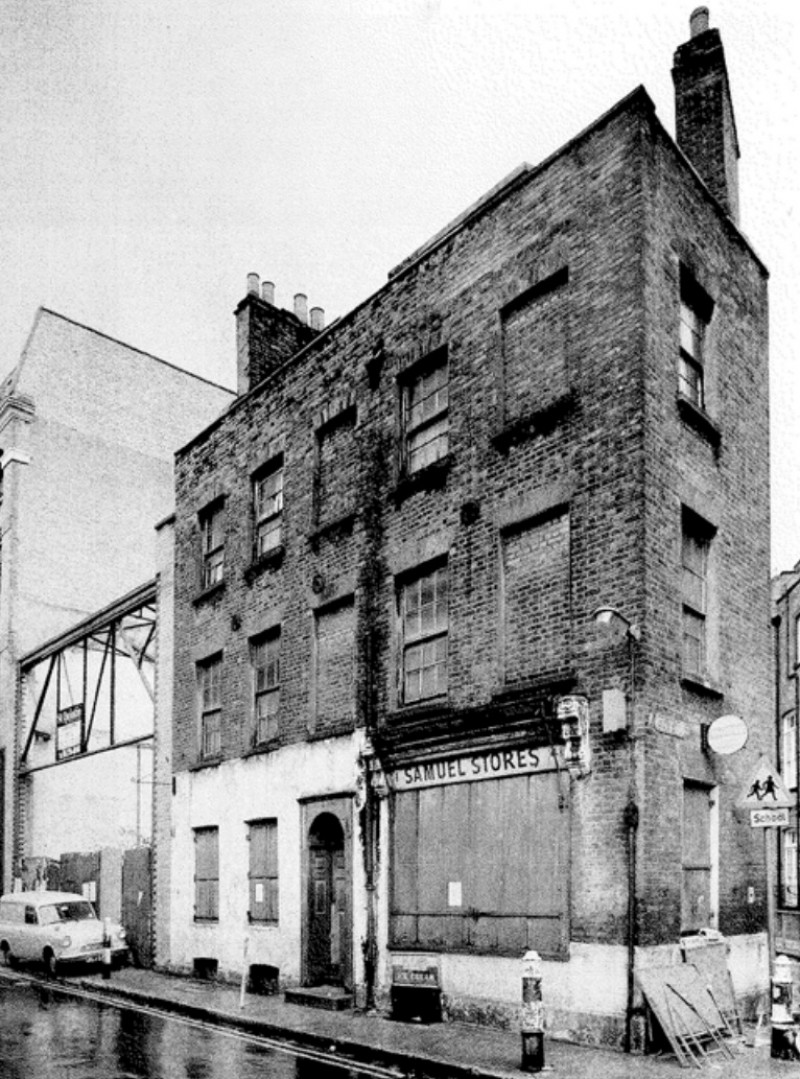 As the 20th century drew on, industry in Spitalfields began to fade away. Many buildings become derelict and home to vagrants. Along with many other old terraces, 41 Artillery Lane was left to rot. Other buildings in the area were demolished. A campaign launched to save those which remained was notably successful. The Spitalfields Historic Buildings Trust was founded in 1977 and helped retain the 18th century character of the area. It also sowed the seeds of the gentrification that was to follow. 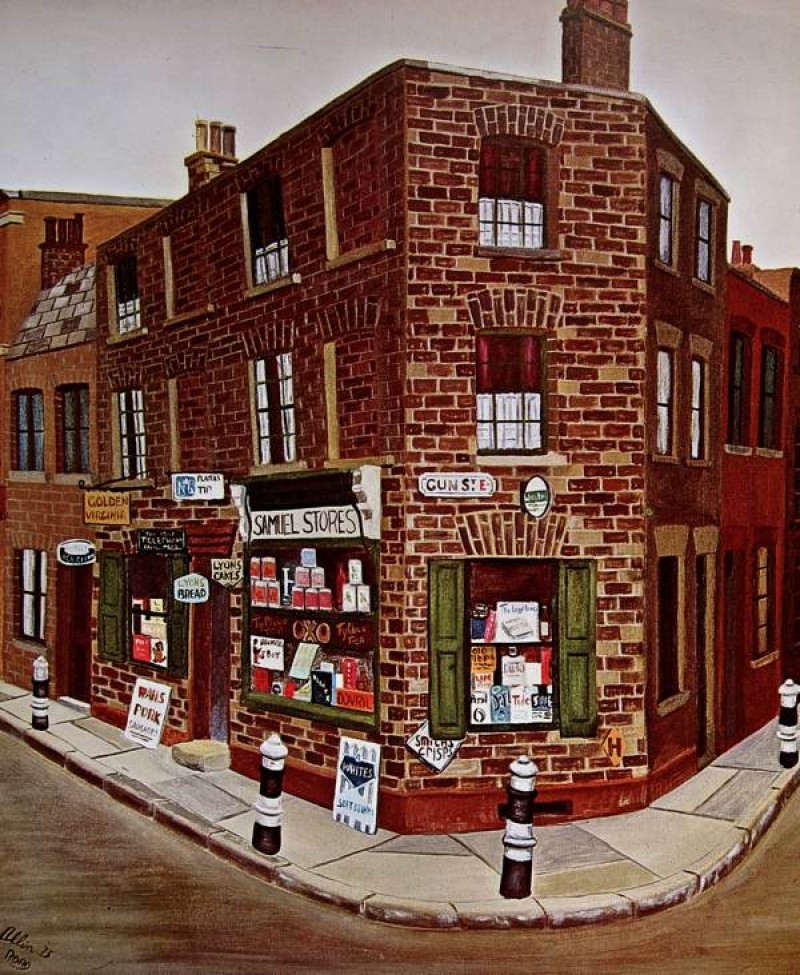 We were delighted to meet Davy Levy, a retired man who was born in 41 Artillery Lane! His grandparents used to run Samual Stores, a grocers that opened in the 1890. It was later taken on by David's parents and continued to serve the Jewish community that lived and worked in Spitalfields. Asked to describe the Spitalfields of his childhood, David holds no false nostalgia. He depicts it as “seedy and filthy” but added that as a child you didn’t really know you were poor. In his close-knit community, family resided within a few minutes’ walk. On Saturdays, the Jewish Sabbath, he and his grandfather would talk a stroll to watch the “puff-puffs” at Liverpool Street Station. The business continued trading into the 1960s, until the David’s parents retired. This painting is by local artist, John Allin (1934-1991). 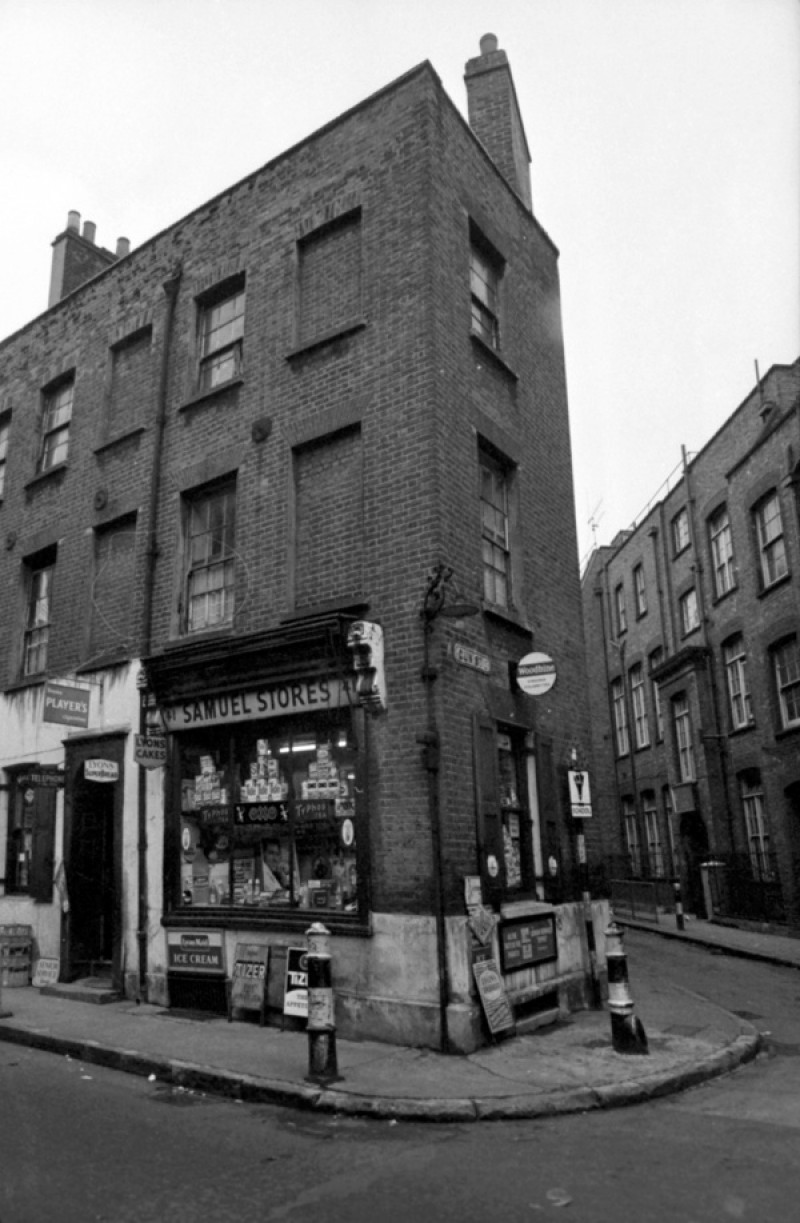 Remembering 41 Artillery Lane from his regular visits as a boy, David Levy recalls Samuel Stores being divided into two parts. In one room was the main shop, stocked with sacks of potatoes, carrots and onions. Chests of drawers held beans, pulses, chillies and curry powder – evidence of the Spitalfields’ emerging Bangladeshi community. Shelves were stacked with tinned fruits and bottled drink. His grandfather would weigh out tea and sugar, or cut orders of salt from a large block. In the other room was the “milk shop”, where milk was kept in an enamel pail and measured out into bottles. The room also housed a public telephone booth, one of very few in the area. 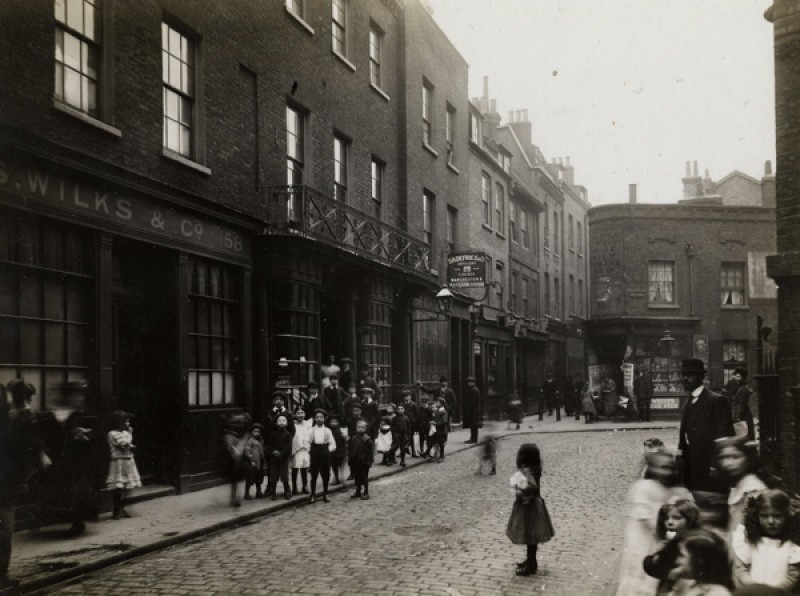 Thanks to the stories shared by Davy Levy, the history of 41 Artillery Lane becomes much more clear from 1890 onwards. In that year his grandfather, a Russian immigrant named Samuel Stolovitski, arrived with his wife from Minsk and took over its lease. He became known as Mr. Samuel and opened a groceries business by the name of Samuel Stores. This image, by contemporary photographer C. A. Mathew, shows of a view of Artillery Lane from Steward Street and was taken in 1912. A close-up reveals a poster announcing the sinking of the Titanic, confirming its date. 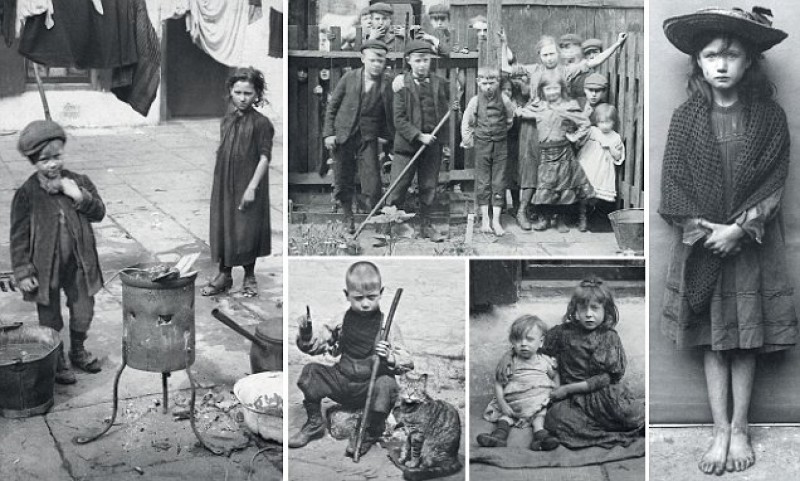 Through the 18th century, Spitalfields prospered. Evidence for this is seen in the well-appointed terraced houses that stil exist, including 41 Artillery Lane. However, this was not to last. By the Victorian era the industry was in a terminal decline and Spitalfields became a byword for urban deprivation and crime. A series of brutal murder in the autumn of 1888, one just around the corner from our building, were attributed to the infamous serial killer Jack the Ripper. These photos are of the "Spitalfields Nippers", taken by Horace Warner to expose the grinding proverty of East London. 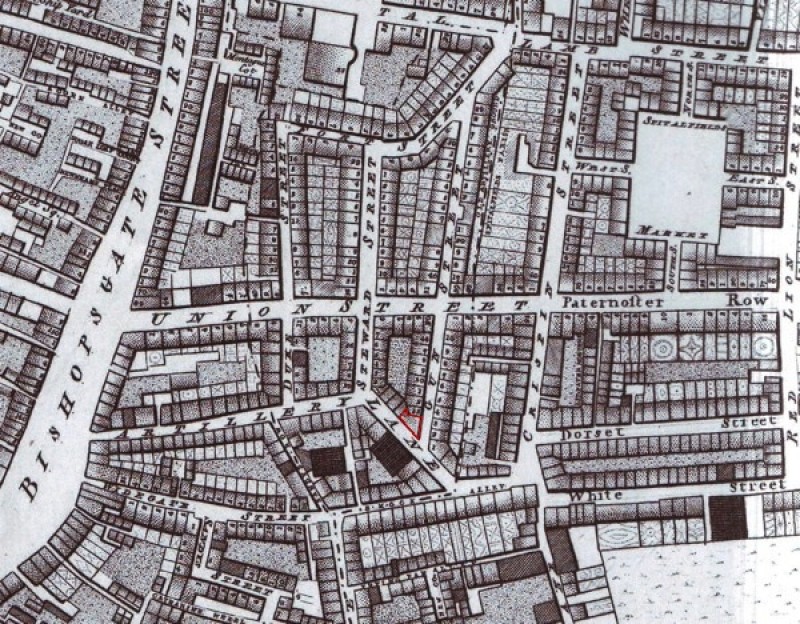 This map from 1799 clearly shows that the layout of Spitalfields has remained largely intact for centuries. Built around 1750, 41 Artillery Lane is situated on the route to a former military training ground, strongly hinted at by street names that also include Fort Street, Gun Street and Artillery Passage. Spitalfields was famous for its silk industry, established by the French Huguenots refugees who settled from 1685 and enlarged by Irish weavers from the 1730s. Our premises, marked in red, was likely both home and factory for these workers. 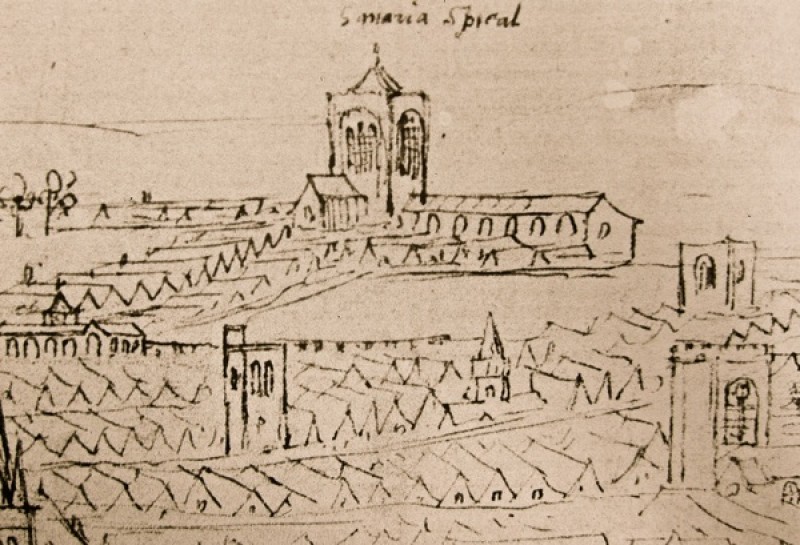 Spitalfields is steeped in history and its name can be traced back to 1197, when the priory and hospital of St. Mary Spital was erected on the east side of the Bishopsgate thoroughfare. This 16th century sketch shows the area around 400 years later, in the time of William Shakespeare. Dissolved in 1539 during the reign of King Henry VIII, the land was converted into a military training ground the use of ‘The Fraternity or Guild of Artillery of Longbows, Crossbows and Handguns’.